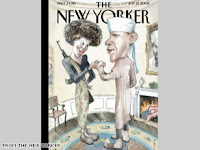 I hear that The New Yorker intended this week's cover to be satire. A way to mock those middle Americans who think of the Obamas as radicals who will steal the White House out from under us all, burning the flag, sympathising with Osama, and raising their fists in revolutionary glee.

The reason this cartoon doesn't achieve a sense of satire is that it seems more like it's supposed to be an inside joke. The kind of illustration you might find in a radically leftist student newspaper, where the editors are secretly thrilled at the idea of some black power revolutionaries taking over and dominating the D.C. elite. The same kind of editors who might celebrate a picture of Che, for example, his profile on their tee-shirts and on posters in their dorms.

When you're a member of an immigrant or visible minority group, and you've attended all the best schools, finished at the top of your class, worked with the best, and then offer a nuanced and principled critique of the status quo, it's surely a shock to the system to not be treated as a public intellectual, but lampooned as a guerrilla revolutionary instead.

I frowned for Hillary when the tasteless merchandising came out about her, and I wince at this week's New Yorker cover for its equally painful attempt at commercial humour. It seems that the kind of mockery that worked fine when candidates were white, male, and sired by the American-born doesn't work as well now that the political landscape is broadening.
Posted by Cherie Payne, BA, LL.B at 12:27 PM 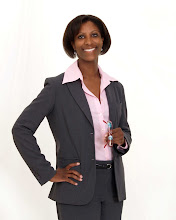